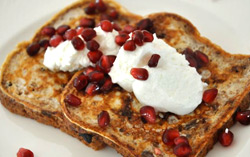 Just because you gave up white bread and sugar doesn’t mean that you can’t enjoy a delicious plate of French Toast! This recipe is made with sprouted grain bread, egg whites and protein-packed Greek yogurt. The whole family will love it. Servings: 5

Here’s what you need…