It starts here. 4 Weeks for $69. Burn Boot Camp is more than a gym. Beyond our unparalleled cardio and strength training Camps, you’ll find 1:1 nutritional guidance, complimentary Childwatch, and a community that keeps you accountable. Can’t get to the gym in person? You’ll also get full access to our five-star virtual workouts.** Hear It From Our Members 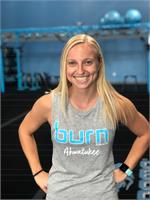 Hi, my name is Haley and I am a trainer at Burn Ahwatukee. I became a certified personal trainer through NASM in 2018 after coming to a realization that helping others achieve their fitness goals is my passion. I've been incredibly active my entire life and I want to be able to share that active lifestyle with others. I was previously a trainer at Burn Colorado Springs and fell in love with the job and the community that Burn creates. I am so happy to be here in Ahwatukee and to be able to grow a Burn community here! I can't wait to help you achieve your fitness goals!