The Hegnas make up a family of 5: Tina and her husband, Harlan, are high school sweethearts with three boys: Hudson & Harrison (5) and Calvin (1). They are a success-driven couple with backgrounds in financial services and film production. In 2016 they moved to a new city, Eden Prairie, MN, and were in the business of making new friends.

While getting settled into the community and finding their new normal, Tina worked on her 2017 resolutions, which dove tailed from a quote she came across “you can’t pour from an empty cup.” In reflecting on how hard this hit her like a ton of bricks, she took baby steps in realizing that she needed to focus on self-care. “Fitness pours into every part of my life” Tina thought, “my job is to take care of everybody, but I’m not taking care of anybody if I’m not taking care of myself first”. And, being a health enthusiast and a servant-minded person, Tina thought perhaps she could be a personal trainer on the side – and maybe that would sufficiently scratch the itch. The twins were 1.5 years old and she was struggling with the Mom guilt that would inevitably creep in if she took on another venture.

Meanwhile, Tina also noticed a friend regularly posting workout selfies at a gym called Burn Boot Camp – “dare I say, it looks like they’re having …fun? While working out?” Shortly thereafter, at her twin’s birthday party, Tina couldn’t unsee how unbelievably ripped her friend was and how much she raved about her gym!

She followed the signs. Frankly, they were hard to ignore. She signed up for a 3 week trial at Burn Eden Prairie and thought “even if these workouts aren’t for me, at least I’ll get a tank top out of the deal”. Well, she was hooked after just one week. She had never had a gym membership make her feel this good, this fast. The women working out beside her looked and felt amazing, and she was making new friends left and right. She found it refreshing and inspiring to connect on this level with other like-minded women. A bonus she didn’t see coming was that her young boys would grow up watching what strong women look like! Tina signed up for a 6-month membership.

A few months into her Burn journey, she read Simon Sinek’s “Start With Why” and was on a mission to shine up her own “why”. Meanwhile, she began chipping away at her husband; all while watching episodes of Shark Tank to scratch her entrepreneurial itch.

Tina and Harlan eventually met in the middle. Tina had supported Harlan in his dreams and ventures for a long time, and it was Tina’s turn to be Batman. Burn had proven success, a well-oiled Franchise Opening Process, and a mission that the Hegnas aligned with. Maybe it wasn’t the out-of-the-box idea that Tina once daydreamed of Mark Cuban investing in, but it was an entrepreneurial power move. They signed for the Maple Grove, MN location in 2018 and opened their Burn Boot Camp in early 2019. It was a long road to find just the right real estate, and they ended up flipping an old IHop location! Check out their opening announcement: 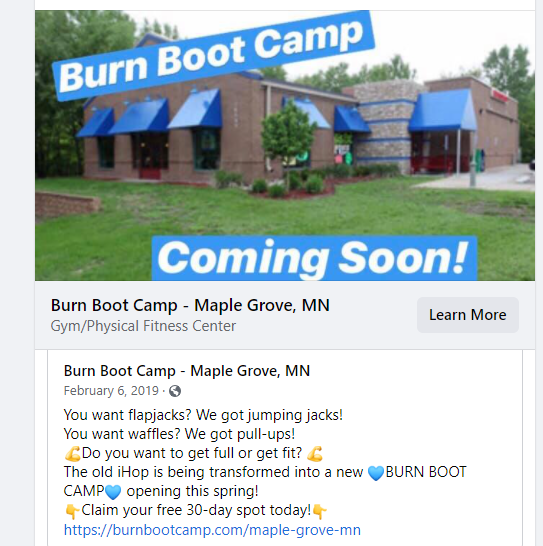 The day they found out their Letter Of Intent was expected was the same day they found out they were pregnant with their third baby. “Well, it’s just like having another set of twins again!” Tina thought, “only this time, one is a gym baby and the other is a real baby!” Their son, Calvin, was born just 2 weeks after their grand opening. The Hegnas love that their little ones get to grow up watching Mom and Dad do what they love, turns out they think donkey kicks are pretty cool too. 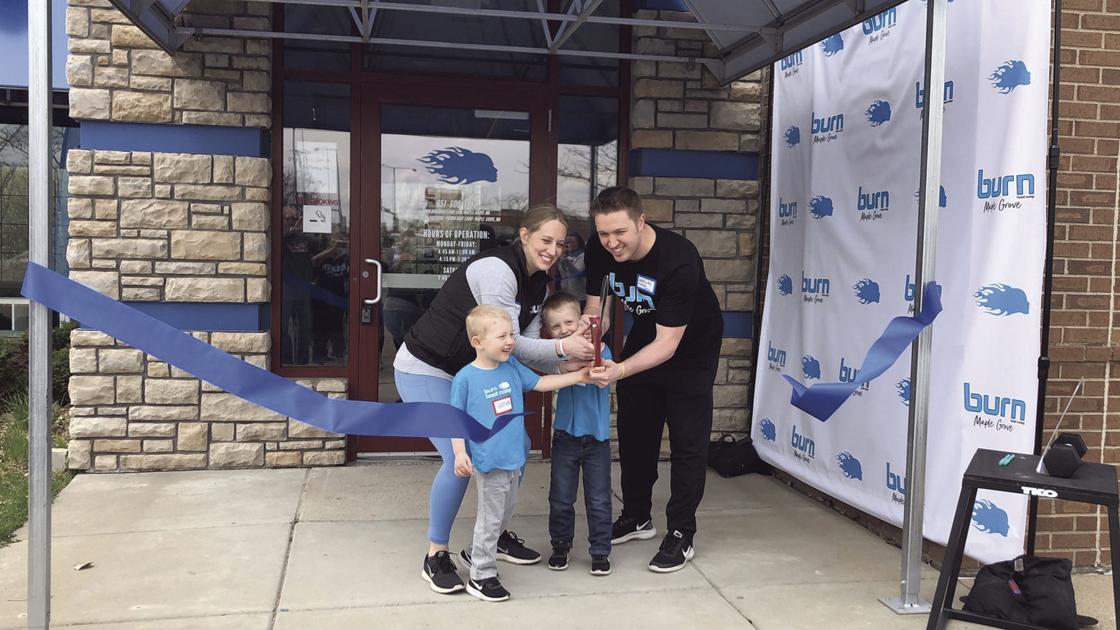 A secret to no one, 2020 presented its own unique set of challenges. Tina was navigating how to lead her team, take care of her business, and nurture her members all while they’re losing their jobs and concerned for their own health. Nevertheless, she persisted, “we want to continue to weather this storm as a unit and come out stronger on the other side.” The Maple Grove, MN location continues to flourish – so much so that making a decision to purchase not one, but TWO more locations was an easy one for the Hegnas. In the Summer of 2020, Tina and Harlan purchased both Plymouth, MN and Blaine, MN, growing their budding empire from 1 to 3 gyms!

What grounded her throughout the pandemic was that she truly believes in what they’re doing. “We believe that if we can, we must. And because we could, we did. No one told us “no,” so we persisted. Because we still can, we still will. Continuing to take care of our community is the heartbeat of what we do” Tina proudly stated, “Because we are so grounded in that, and we believe in what we’re doing — just knowing you can impact one life — it’s always worth it.”

Did Tina’s story resonate with you? Become one of our 400+ franchise partners and create a lasting impact on your community! To learn more, visit us at https://franchise.burnbootcamp.com/.