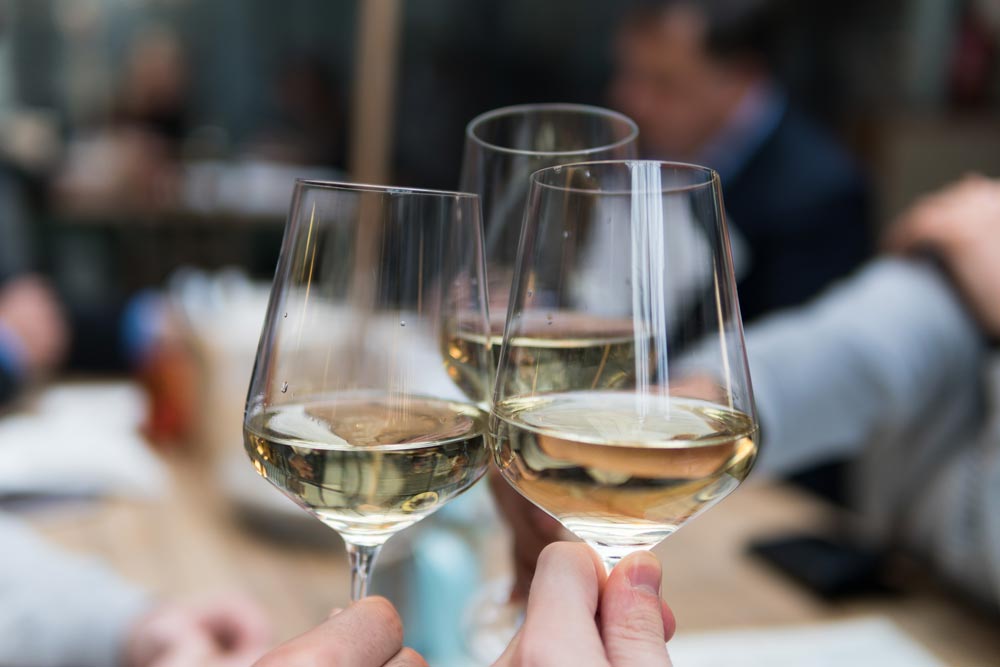 What Happened When I Stopped Drinking Alcohol on Weekdays

Unwinding is something that I have struggled with for as long as I can remember. Maybe it was growing up watching my mother with her heavy-pour, two-ice-cube, self-proclaimed “trophy” of chardonnay at the end of the day? Maybe it was my lengthy career in retail with odd hours? Whatever it was, somewhere along the way, “winding down” for me became synonymous with “downing wine.”

Whatever it was, somewhere along the way, “winding down” for me became synonymous with “downing wine.”

Let’s get this straight right off the bat: I still love wine. Sober January is definitely not my thing. I started Burn Boot Camp in February 2018 and I have had great results. I have gained muscle, lost inches and become able to do push-ups off my toes for the first time since having my now 3½-year-old, but my weight remains pretty stagnant. After a particularly indulgent holiday season that trickled into January, I decided I needed a major lifestyle change to continue to progress.

As I started to look at my macros, it was apparent almost immediately where my issue was: THE WINE. If I actually calculated my consumption correctly and measured my glasses as 5 ounces (who actually does that…?), on average, I was drinking 300 calories every night. As someone who had given up her beloved soda and coffee creamer almost a decade ago to reduce sugar and calorie consumption, I cringed thinking at the number of excess calories I was consuming just in wine.

As a firm believer in lifestyle changes that are sustainable long-term versus short-term diets, I decided the best way for me to intercept my cycle of “work, wine, repeat” was to stop drinking alcohol during the week.

How Wine Was Sabotaging Me

The two biggest ways my nightly glasses of wine were sabotaging me were all the extra calories they were causing me to consume and the poor eating decisions they generally led me to make. Ever found yourself elbow deep in a basket of tortilla chips after a couple of margaritas at your favorite Mexican restaurant? How about coasting through a fast-food drive-through after a night out with friends? Alcohol lowers our inhibitions, thus influencing some less-than-ideal food choices. One glass of wine contains about 120 calories. Double or triple that and add in the snacks that go along with your wine, and you could be consuming at least 500 extra calories, but most likely much more! Doing that every night, you’ll quickly rack up those extra calories, and the extra pounds that come with them.

Double or triple that and add in the snacks that go along with your wine, and you could be consuming at least 500 extra calories, but most likely much more!

Besides the obvious excess calories, alcohol in general can have many adverse effects on your workout. Anyone who has indulged in excess knows that alcohol is a diuretic, which causes dehydration.

Most surprising to me was the effect alcohol can have on your sleep. Although the late-night cocktail can help you relax to get you to sleep, alcohol actually inhibits you from reaching REM sleep, causing you to wake up groggy. My wine-induced sleep was not only affecting my ability to wake up feeling well rested but also inhibiting me from working out to the best of my ability at noon camp.

Alcohol was also messing with my metabolism. Your body isn’t built to store alcohol, so it works to burn it quickly, metabolizing it much more quickly than carbs, fats and protein. The plus side is that alcohol speeds up your metabolism, but the downsides are that it causes your body to stop absorbing any nutrients and stops your body from burning off anything except the alcohol you consumed. All that food you ate gets pushed to the side until it has burned off all the alcohol completely. Initially when I stopped drinking alcohol on weekdays, I anticipated I would struggle to attempt to unwind at bedtime. I substituted my wine with an evening glass of hot tea and found that this not only helped me to unwind but also aided in my digestion after dinner. Overall, I felt much more energized and less groggy. It was easier for me to wake up, and most mornings I was actually waking up before my alarm went off.

An added bonus of not drinking alcohol on weekdays was the extra cash I accumulated! Cutting out my weekday drinking saved me, on average, $30 a week. I recommend taking the cash you would normally spend on your favorite bottle of wine and putting it in an envelope every week. At the end of the month, splurge on a great pair of new workout leggings!

Here is the part you are here for—the measurable results I saw when I stopped drinking alcohol on weekdays. Over the 30-day period, I maintained my normal 80/20 diet, counting both macros and calories. I also continued to do high-intensity workouts between five and six days a week and maintain a fairly active lifestyle outside of working out. The only major change I made to my lifestyle was cutting out alcoholic beverages on weekdays. Over the course of the month, I lost 2 pounds, 1 inch off my waist, ½ inch off hips, ½ inch off my chest, and ¼ inch off both my leg and arm measurements.

If you would have asked me a month ago if this was a lifestyle I could maintain, I would have definitely told you “no.” After I stopped drinking alcohol on weekdays for 30 days and started seeing the results, however, I can say this is a lifestyle change that I will be sticking with for the immediate future. I continue to allow myself grace and indulge if I happen to go out with girlfriends during the week, but day to day, I continue to limit my alcohol intake and continue to see positive results.